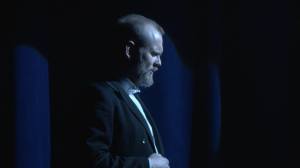 In October 2015 I started working with the Reykjavik City Theatre and the Icelandic Dance Company on composing and directing music for the play Njála which is one of the most revered Icelandic Sagas written some 800 years ago. After intermission I play the whole of the 7th Piano sonata by Serge Prokofiev on an old Bose 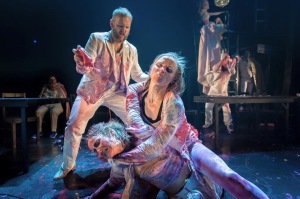 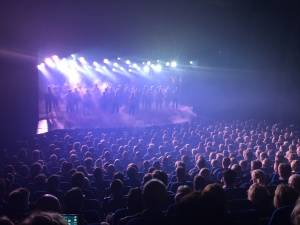 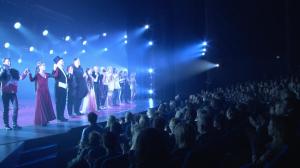 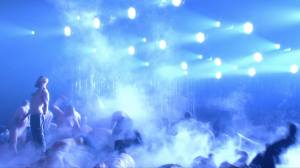 ndorfer Imperial Grand while the cast dances under direction of choreographer Erna Ómarsdóttir (see pictures below). The director, Þorleifur Örn Arnarsson, did an amazing job of working with the cast and 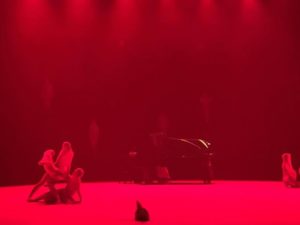 all the staff to make the experience of Njála complete with a pre-show, lectures and exhibition in the foyer. There is a whole 45 piece men’s choir, Karlakor Kópavogs, that comes in towards the end of the show with a blast piece and then the whole cast ends the show with one of the most beautiful Icelandic psalms ever written. As you can see in the pics below I also get to take part in the show by acting and dancing for the first time on stage which has been a blast. The show has run sold out for 30 times and will then be put on stage again in the fall due to popular demand. As a musician and 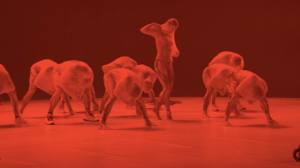 performing artist this has been one of the most challenging experiences in my life while also the most fun. To step out 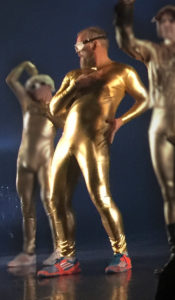 of the comfort zone of only playing the piano/keyboards and composing music to being in a real investigation on this old Saga, taking part by acting, dancing a routine as well as improvising has all expanded my view of how I relate to performance art and collaboration. I, for example, never would have guessed how hard it is to play a 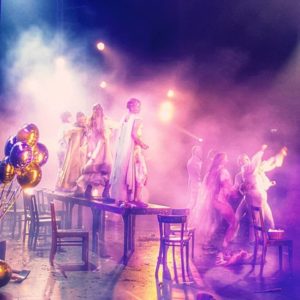 Prokofiev Sonata on a rotating stage and how reliant I am on orienting myself on the stage while I play a concert. In the play I have dancers all around grunting and screaming, jumping and crawling while I am playing in a red monochrome light that also makes all the notes very hard to see after a while. All this I had to adapt to by, for example, practicing in the dark in addition to just play the piece which is quite a challenge on its own. Another big challenge has been energy regulation. I am on stage more or less for 100 minutes, acting and dancing until intermission where I have 20 minutes to shower, put my tailcoat on, clean my makeup off, drink some energy drink, prepare the piano and then go on stage to give a 3-4 minute ‘stand-up’ introduction to the sonata where I tell a bit of history and make the audience laugh. Then I walk to the piano and have an 18 minute performance of the sonata that requires all the energy that is left. After the performance there are 140 minutes gone and then I am on stage for the rest of the play, 45 minutes, playing almost nonstop on prepared piano as well as accompanying the men’s choir when they enter the stage. What has been most helpful in energy control is letting go of all tensions in my body whenever I can and breathing deeply and rhythmically “through the heart” when I can as a way to get my pulse down, drink a lot of water, and be extremely well prepared to lower the stress levels. The ability to ‘change gears’ from dancing, to playing keyboard, to acting, to singing is also a skill that I have had to develop more consciously. What I find the most challenging is to switch between the ‘stand-up’ right after the intermission directly to performing the sonata. I still find it a challenge because they are such different activities and modalities of communication. There again comes breathing and a clear focus of intention of what I am about to do, letting the immediate past go and embrace the immediate future of playing one of my favorite pieces of music. All this endurance challenge make each and every show like a roller coaster ride where you cannot escape the speed or the pull of gravity and you come out exhilarated every time while also thoroughly squeezed.