We had a great time playing on Kex Hostel on Tuesday night. The house was crowded with jazzlovers of all ages and we all had great fun playing. At the beginning of the gig I had trouble with one note on my Rhodes, and lo and behold, we had the #1 Rhodes specialist in Europe in the house, Freddan Adlers from Gothenburg in Sweden, who was eating dinner with his good friend, Eythor Gunnarsson from Mezzoforte. He was kind enough to propose to fix it for the gig. After getting some tools from the lobby we found out that what was needed was a glue to put the felt tip on the hammer, then it would have to dry which would take to much time, so I had to play the gig with a hard sounding middle G. Freddan suggested that I could build my solos around it like Keith Jarrett did on one recording with Miles Davis (I forgot which one). It was a nice comment from a nice guy who is btw right now is fixing my precious Rhodes.
Here is a pic from the gig in this homely place. 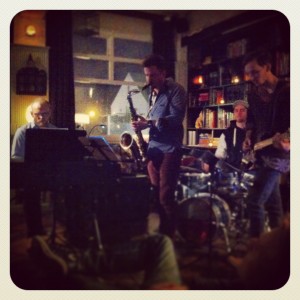